This basic principle informs everything do, and we always make sure that our tactics reflect it. We never try to reinvent the wheel (always remembering that you don’t build communities – you join them) but rather spend some upfront time doing good, old-fashioned research. Where is the community of interest that you want to engage with? What are they talking about? How are the talking to each other (from a technology and content perspective) and how can our clients join the conversation in a relevant, valuable and respectful way?

This concept of working with and at times enhancing organic processes (that is, things that are already happening, or patterns of adoption or communication we have seen again and again in our work) is something we bake into every project, and it looks like we’re not the only ones who get the power and appropriateness of the metaphor. Check out this great post from Ike Pigott on the Now is Gone blog (in support of the new book by Geoff Livingston and Brian Solis of the same name).

While “social media” can happen on its own, it benefits from expert help. Each social media practitioner brings a different prescription for the right mix of ingredients. Along the way, you have to closely monitor the conditions, and know when to add water, when to goose the process, and when to back off. You also need to stay involved and engaged with the project, realizing this is a process – requiring a commitment to periodically get your hands dirty in a personal way.

If you’re not careful, you destroy the very organic support you were trying to cultivate. And there’s no real value in making compost, unless you intend to use it to feed and supplement existing public relations and reputation management efforts. If you have an expectation of overnight results, you aren’t growing anything of value. And if you’re caught cheating, you end up with a smelly pile that soils your name and encourages others to distance themselves from you.

I especially like his advice on how to choose an agency or consultant to help you in your forays into this space. Hint: you need to check under their fingernails.

The ROI of Communities – Part II

Earlier this week I did some prep for a roundtable on the ROI of Communities at a conference held by the Canadian Marketing Association, and came across the most wonderful list of statistics, courtesy of Bill Johnston, and compiled by Joe Cothrel. Amazingly, I’d never come across these numbers before, so I wanted to make sure to share them with you.

I also pulled together some fine examples of successful online communities used for pure marketing purposes:

Earlier thoughts on calculating the ROI of communities can be found here, and I’m also currently working through a bunch of ROI-based stuff that I hope to be able to share with you as soon as it’s gelled. I’ve come across some interesting thinking, so hopefully it will make a good post. Have a great weekend!

The ROI of social media (and digital marketing in general) is a topic we’ve been tossing around SMG a ton lately, as has the media in a number of recent articles. I’m going to keep this post focussed narrowly on the ROI debate around social media and interactive campaigns, rather than enterprise use of social media.

During a conversation with Collin last week, he pointed out that in his experience, clients expect hard numbers on digital campaigns generally because measurement is possible, not because it necessarily means anything (correct me if I’m wrong on that, @radicaltrust). Put otherwise, we measure traffic simply because we can.

The simple fact that a .5% click-through rate (which is a decent showing) on a 50CPM ad buy (that is, it costs you $50 for every 1000 people who saw your ad) is considered a success is proof enough that these measurements are largely meaningless. Have a look at the math – if a client spent $75,000 on a digital ad campaign that got 1,500,000 impressions, with a click-through rate of .5%, they just paid $10 per “lead” – if you can call them that, since I’m not sure clicking on a banner add qualifies you as a “lead” any more than being in the same room with me qualifies you as my “friend”.

This desire to measure based on completely inadequate tools is spreading into the social media space as well. As far as I’m concerned, this is out of pure laziness – there are so many other, better metrics available to us when we start actually talking to people. The problem is that they require some form of human assessment, which makes them expensive and also something that requires thought. In this article from Adweek, Gordon Paddison, an executive at New Line Cinema, described a user-generated marketing campaign for the film Wedding Crashers, noting that

Despite the millions of participants who uploaded photos of themselves to “appear” in New Line’s “Crash the Trailer” program for Wedding Crashers, no one could “quantify that engagement level. No one knew or could determine the metrics for that level of brand affinity and personal engagement with the brand. So you can’t go to the CEO and say x equals y. That poses a problem on a consistent basis.”

Which strikes me as absolutely insane.

Before I make my next point, I want to state clearly and emphatically that I believe if you cannot measure it, you cannot manage it. In all of our programs, we gather ridiculous amounts of data that we crunch and graph and compare to come up with meaningful metrics. However, I also believe that dollars are not necessarily the currency that social media marketing programs should be measured in, especially in these early days. Tying something as ephemeral as friendship or relationship or engagement to something as complex and relatively rigid as a currency or sales target seems incredibly simplistic. It’s like saying to your friends, “Tell me how much you like me – in dollars,” rather than determining how much they like you by a more accurate measure – whether they show up when you need to paint your living room.

Now – I know that everything devolves into one simple thing: whether or not you get asses into movie theatres or motorcycles on the road or sandwiches bought and eaten. The act of purchase is critical to our entire universe, our reason for being. But (as anyone knows who has seen a diagram of the fabled purchase funnel) the act of purchase is not simply that one instant. It’s the proverbial iceberg – 10% visible (at the cash register) 90% under water (the rest of the consumer’s life).

So how can we help clients better understand that there are a myriad of opportunities to get messages to consumers and foster engagement with their products and brands, and that measurement of these interactions is in its infancy, but that there is inherent value in connecting with consumers? It’s common sense, but unlike clickthroughs or other superficial traffic stats, it’s damn hard to show on an Excel spreadsheet.

November’s dinner is almost upon us – scheduled for this Wednesday, November 14th at Brassaii (dinner is $40 pp, taxes and gratuity included), Kate Trgovac will be speaking to our group about Virtual Worlds.

The popularity of virtual worlds is rising. Second Life is one of the most well-known with Canadian brands like Telus, Harlequin and Canada Post setting up a presence or holding an event, but what about other worlds? Habbo Hotel. Virtual Laguna Beach. Club Penguin. StarDolls. Sony’s Home. Billions of dollars are being invested globally in 2D and 3D immersive experiences. How will these experiences fit in with social networks? What’s the appeal? Should I be worried: as a marketer, a parent, a participant? Kate will share some of her thoughts on the rising popularity of virtual worlds and give an overview of a few of the more popular ones.

If you have any questions/topics that you’d like to see Kate address, please leave a comment on the TGGD blog.

This month we also have a little more room than usual, and Kate’s firm, Reinvent! Communications, will be sponsoring the evening and picking up the tab for ten students to attend. Please be sure to sign up on the wiki – see you then!

Negative is the New Positive

I love that phrase, and use it frequently because it so perfectly encapsulates the opportunities presented to companies when they forthrightly engage with their consumers/constituents via social media. I therefore thought it would be the perfect title for a piece that’s running on the Internet Evolution website today, a site that’s all about “news, analysis & opinion about the future of the Internet,” and which is run by the folks who publish Information Week – CMP.

The article is an entry-level explanation of why social media is transforming how companies interact with their consumers, and I use the Dell Hell blog as a classic example.

You can read the complete article here.

Many voices singing from the same blog 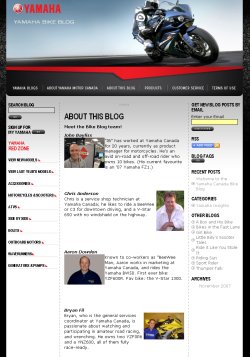 One voice, big following – is this the formula for successful corporate blogging? Or, what about secondary voice(s) assisting a superstar executive? Here, I’m thinking of Alicia Dorset – she who is designated as “blog editor” on GM’s FastLane blog, quietly posting between chairman Bob Lutz’s missives.

She’s not a dreaded ghost blogger, since Alicia is identified by name… but who is she? Did she work at GM (as what?) before she took on the blog editor role? What expertise in GM or cars does she bring to the blog?

That kind of ‘street cred‘ is exactly what a group of Yamaha Motor Canada employees bring to a brand-new corporate blog, the Yamaha Bike Blog (their second).

(10 in all right now, with likely more employees to come).
None of the Yamaha bloggers have a corner office; all of them ride for pleasure and for work. These are the folks right in the thick of all things motorcycle – the ones steering into the curves on prototypes, wrenching, and developing everything from ad campaigns to product development cycles.

Safe parameters were set up on a Terms of Use page so users clearly understand what’s up for discussion and how. Same as was done when Social Media Group helped Yamaha launch its first corporate blog – for snowmobilers – called Sled Talk in Spring ’07.

We also worked with Yamaha to create “Ethics of Blogging” guidelines for all bloggers – a critical step, especially when you’ve got so many voices… they better all be singing in sync.

Risk management aside, going with a group blog addresses that chestnut of a concern about corporate blogging – the time it takes. “There is a way to get off the hook when it comes to the time demands of blogging…group or team blogs are becoming increasingly common,” writes Debbie Weil, author of The Corporate Blogging Book (a great introductory read).

Not only does the Yamaha Bike Blog team share the load in researching and composing the blog’s content, they can share the task of actually publishing their words – meaning that each of them can use the “dashboard” behind the blog to add links, photos, videos, etc. and make it go live.

And the collaboration goes one step further: we’ve equipped the Yamaha Bike Blog with a wiki in the dashboard, so that employees can go in and leave each other notes about what they plan to blog about and when (to avoid duplication) as well as type in suggestions to each other’s content to make it even stronger.

Certainly, for now, the psychological benefit of group blogging is immediate: all the Yamaha Canada employees participating are blogging newbies – so no one is going into the potentially scary blogosphere alone! (Anxiety loves company;)

Kudos to Yamaha Motor Canada for taking its second plunge into blogging. And hats off to the brave front-line workers who are starting a digital conversation with their customers and fellow bike fanatics!