All posts in “blogs”

It’s the Social Media Roundup, and SMG is a year older, wiser, and awesome…r.

That’s right, SMG celebrated 3 fan-damn-tastic years of awesomeness last week, with special guest – the endangered caribou!  I’ll let the stars of the video kickoff for the week say it better than I:

So now that THAT’S stuck in your head, on to the news.

Authenticity vs. Transparency, or How I Learned to Stop Worrying and Love Toplessness
Augie Ray has written a great post about the recent trials and tribulations of CEO Chip Conley of Joie de Vivre hotels.  Chip posted a picture of himself topless at Burning Man (with…something on his head) on Facebook and some of his employees took offense.  What followed sets up a nice case study for the distinction between personal authenticity and transparency.  (Seriously, what IS that on his head?)

Sign Up Now to Enter…But Not on Facebook
Last week, Facebook made revisions to its Promotions Guidelines which dramatically restrict the methods by which companies can run contests and the like on their fan pages.  Among the restrictions: you will only administer the promotion through an app, you must submit materials for review by Facebook at least 7 days in advance, and the prize may not include dairy products.  The lactose intolerance lobby has some clout, it seems.

Rupert, Rupert, Rupert
Rupert Murdoch is making headlines (and getting plenty of free advertising, to boot) by threatening to remove all NewsCorp properties from Google within the next few months.  To which Google responded: meh, alright. Now, if this is a ploy to fire up the search wars again by selling exclusivity to Bing or Yahoo! then I say interesting play, Mr. Murdoch.  Otherwise, I’m in Google’s camp.  Meh, alright.

My blog is better than your twitter!
Joel Postman has a post up on Social Media Today that sums up most of my thoughts on the value of twitter vs. blogs.  The one other advantage in the blog’s corner that I’d add is the permanence factor.  The twitter stream is so quick and broad that your tweet is swallowed up and downriver before you know it. The search options are coming along, but dollar for dollar, I’d put my money on something that I know will be findable and there until the ablogalypse hits.

Who owns your personal brand? 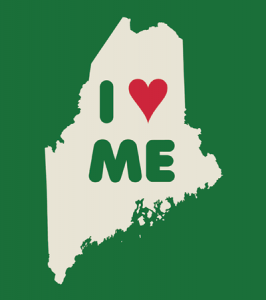 I love Maine (ME) shirt from Laughing Squid

I have never been a fan of the notion of “personal brands”. I get the meaning of how one can build a brand-like presence based on your interactions with social networks, what pops up when you Google your name and the signal-to-noise ratio on Twitter (aside: services like Twitter Grader,  Twitalyzer and Twitterrank can give you some indication). To me everything about personal branding can be summed up in one word that avoids the messy translation of the metaphor; reputation.

But what about the reputation/personal brands of high-profile community managers, brand stewards and social media customer service reps? These roles have been popping up all over the place lately. In many cases these people have spent company time and resources building up their personal brand as a corporate asset. In other cases someone may have previously established a reputation and then lent some of their influence to the company they represent.

From a corporate perspective, borrowed or built reputation has value, influence and most important the authenticity of a real personality.  Yet there is also tremendous risk.

The answer in almost all cases is “it depends”, which is not sufficient in my mind. In fact, we may not be far off from the first law suit when a company tries to fight for control of the trappings of a high-profile personality after they have left the company.

This is tricky stuff and I am no IP lawyer, but here are a couple of thoughts that may help social media mavens and the companies they work for to keep their branding separate.