This week’s social media roundup is special for Halloween, here are seven of our favorites from around the social web.

Enjoy and have a safe and awesome Halloween from all your friends at Social Media Group.

I always have a soft spot for Edgar Allan Poe’s “Raven”.  I’m pretty fond of the Simpson’s version, but this version read by John De Lancie (who played Q on Star Trek) is excellent. (via BoingBoing)

More treat than trick, Foursquare has released two badges for users this Halloween. Confession: I checked into the office today today just to unlock the badge. I’ve been a sucker for badges since Brownies.

In order to score Halloween 2010 badge (above, at right), simply check in anytime this weekend, anywhere on Foursquare, but make sure to shout “Happy Halloween!” when you do. The more coveted badge, the Spooky Swarm (above, at left) is only for those hosting the rowdiest parties, as you’ll have to check in at a party spot with as-yet-undisclosed large number of fellow Foursquare checkins. We’re guessing somewhere between 50-100 others, but listen for the full how-to on Twitter over the weekend as people unlock this.

Much healthier than those tasty teeny chocolate bars

All this Halloween-related surfing has made me peckish. Perhaps I should grab one of these Halloween-themed Bento Box Lunches? (via: The Kitchn)

Trick-or-Treater Index: Data Crunched for List of Best US Cities

Over at The Daily Beast, Richard Florida writes:

“The idea for the Trick-or-Treater Index came to me several years ago, right after my wife and I spent our first Halloween in Toronto and I wrote about it in my Who’s Your City?. I’d lived in many urban neighborhoods in the United States in New York, Boston, D.C., Pittsburgh, Columbus, and Buffalo, and frankly never seen many trick-or-treaters…”

Chicago, San Diego and Trenton, NJ made the list. For all the details, check out the Best Cities for Trick-or-Treating media gallery at The Daily Beast.

Adam Frucci at DVICE writes of John Savio’s costume: “This epic homemade costume consists of a jailbroken iPhone 4 hooked up to a 40-inch LED LCD panel, a back camera LED light and a whole lot of polish. The phone connects to the display via VGA out, allowing John to control the screen and display, making it look like a real-deal giant iPhone.”

Staying with costumes, Mashable ran a Social Media Media Halloween Costume Contest this week. Facebook, Twitter, Foursquare and YouTube make a good showing. I’m all about memes as Halloween costumes, so the guy dressed as Sad Keanu gets my vote.

Just in time for Halloween, Yahoo! labs developers have released a zombie game that goes beyond the norm (rising from the dead, eating brains, etc) and enters the realm of (gasp) education.

Shambling Hordes is a simple game of territory control that challenges players to assume the mantle of “Zombie Warlord” and conquer a desolate island with a limited supply of undead legions. Elevating the time-honoured tradition of carving faces into pumpkins for jack-o’-lanterns, is Alex Wer, the Pumpkin Geek who has an incredible online gallery of carvings. Hmm, I wonder if it is too late to order a Social Media Group logo-carved pumpkin? 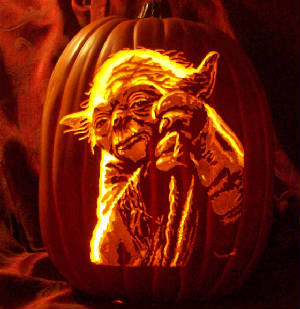