It’s January 10th and high time I made some prognostications about some of the things to come in 2009. I’m going to sum up something that has been on my mind this week in one sentence that has very broad implications: netbooks are going to destroy the traditional laptop market. 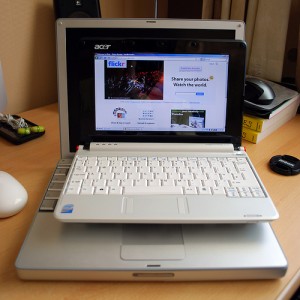 For those of you unfamiliar with netbooks, they are:

Typically retailing for between $300 and $700 (about the cost of a decent mobile or smart phone), they are cheap, they are portable and with an estimated $10.5 billion dollar in surplus inventory within the semi-conductor market (the companies that make the chips that make them go) caused by declining computer sales as global customers hunker down and save their pennies/put off upgrades, market conditions will likely make them cheaper still.

Not convinced? How about introducing telcos to the mix? Most netbooks come equipped with wifi and/or EVDO cards. Given the price point on the hardware, it is conceivable that consumers could eventually be offered a free netbook in exchange for signing up for a multi-year mobile broadband plan (at the moment AT&T is offering a $99 Acer in exchange for signing up, but just wait until there’s some competition). The similarity to cellphones and cellphone marketing strategy is quite striking.

Sales numbers bear out the potential for a dramatic upward trajectory in netbook penetration. In 2007, about 182,000 netbooks were sold. 2008 sales were estimated to hit 11 million units. Companies like Asus and Acer estimate that about 10% cannibalized the traditional laptop market. That, of course was before the perfect storm of a brutal economy, decreasing costs and telcos jumping on the bandwagon.

Why am I blogging about computer technology and market conditions? Because cheap, broadly distributed, Internet-enabled netbooks will profoundly change mobile/social computing. When almost anyone, anywhere can pull a fully enabled (but just a little bit smaller) portable computer out of their bag or purse and connect with friends, family and content on the Internet, anywhere and anytime via the magic of mobile broadband, the tools that enable that sociability (collectively known as “social media”) will change dramatically in both use and importance (I’m not even going to get into the potential impact for cloud computing).

The big question is, are you ready?